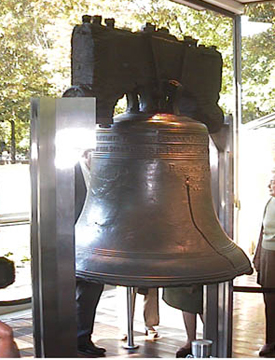 The Liberty Bell, weighing 2,080 pounds, was originally cast in England, and arrived in Philadelphia in 1752, where it was recast. The Bell commemorated the 50th anniversary of the founding of Pennsylvania under the Charter of Privileges which insured religious freedom for the citizens. The roots of this freedom dated back to 1620 when the Pilgrims wrote in the Mayflower Compact that they came to America, “…for the Glory of God, and the advancement of the Christian faith …”

In keeping with this fundamental belief, the Liberty Bell was inscribed around its crown with a Bible verse from Leviticus 25:10, “Proclaim liberty throughout all the land unto all the inhabitants thereof.”

Over the years the Liberty Bell has been rung on many occasions. On July 8, 1776 it was rung at the first public reading of the Declaration of Independence, which concludes, “…. with a firm reliance on the protection of Divine Providence, we mutually pledge to each other our lives, our fortunes, and our sacred honor.” It was later rung when the Constitution was ratified. The Liberty Bell cracked in 1835 while being rung to mark the passing of Chief Justice John Marshall.

Today the Liberty Bell is permanently displayed in Philadelphia across from Independence Hall in a pavilion where people can view this shrine of freedom.